The much anticipated Disney animation Wreck It Ralph is being released over here next week, but it is not just the main feature that has got animation fans eagerly waiting in line to this film. 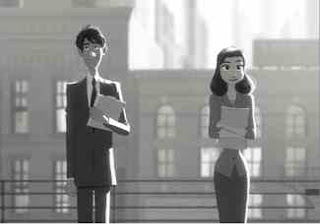 Those lucky Americans have been able to see both Wreck It Ralph and its accompanying animated short since November, and have been crazy about them ever since.

Alongside Wreck It Ralph is a brand new animated short, Paperman, the brainchild of first time director John Kahrs. It tells the story of a lonely young man who meets a beautiful woman when a piece of paper blows into her face. When he spots her in an office across the street, he uses paper aeroplanes to try and gain her attention.

In simple black and white (and maybe just a hint of colour), Paperman is an endearing and heartwarming romantic comedy which looks beautiful.

Now, if Wreck It Ralph isn’t your kind of thing, thanks to those lovely people over at Disney, you can now watch Paperman online. Just click the link below to see this wonderful piece of cinema.

It is thought that this is the future of animation, with the seamless merging of 2D art and 3D animation. I wonder how many people will be going to see Wreck It Ralph simply to see this animation on the big screen!

Read the Wreck It Ralph here!