After the sad passing of Alan Rickman today, it seemed only right to do a retrospective of his generation spanning career.

Born in Hammersmith in 1946, Rickman became involved in drama from a young age. After finishing junior school, he won a scholarship to Latymer Upper School and then went onto Chelsea College of Art and Design and the Royal College of Art.

However, instead of following down the route of drama, Rickman decided to follow the path of graphic design. “Drama school wasn’t considered the sensible thing to do at 18.” he commented in an interview in Time Out. Three years later, he wrote to the Royal Academy of Dramatic Art requesting an audition.

After graduating from RADA, Rickman started his professional acting career on stage, appearing three times at the Edinburgh International Festival and moving on to work with the Royal Shakespeare Company. Rickman was not adverse to Shakespeare having played Tybalt in the BBC adaptation of the play in 1978. While at the RSC, Rickman performed in Les Liaisons Dangereuses which gained him nominations at the Tony Awards and the Drama Desk Awards. 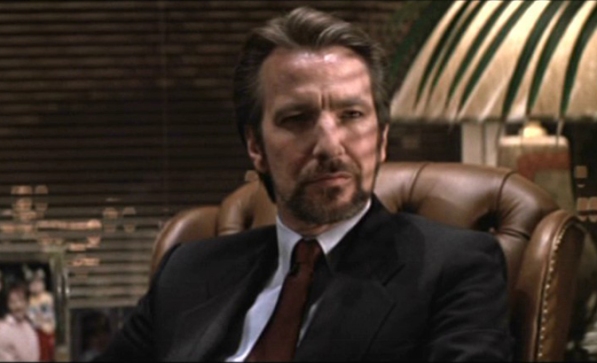 However, it was Rickman’s performance in Die Hard (1988) as German terrorist Hans Gruber which brought him to Hollywood’s attention. Cold and unpredictable, Gruber was voted the 46th greatest villian in AFI’s poll in 2003. Portraying the internationally feared mastermind behind the Nakatomi Plaza heist, Rickman fell into  being typecast as The Villain. This was a role that Rickman never really shook off, with him later being cast as the Sheriff of Nottingham in Robin Hood: Prince of Thieves (1991).

The Sheriff of Nottingham paired Rickman’s dulcet tones with his great comic timing to give us, arguably, one of his best performances. After all, anyone who uttered the line “That’s it then. Cancel the kitchen scraps for the lepers and orphans, no more merciful beheadings, and call off Christmas!”, with the perfect amount of venom, while still looking good in skintight black leather, must be a winner!

After Robin Hood, Rickman stepped away from the villainous roles for a while, appearing in comedic films such as Galaxy Quest, Dogma, Love Actually and as Marvin the Paranoid Android in The Hitchhiker’s Guide to the Galaxy.

Rickman would return to his villainous roots, when he was cast as Professor Serverus Snape in the Harry Potter series (2001-11). Whether you loved or hated Snape as a character, there was no arguing that Rickman’s presence brought the slightly terrifying teacher to the screen perfectly (even if Snape in the book was in his thirties…). For many, this was the first introduction to Alan Rickman, and a key part to many childhoods.

However, none of these exceedingly famous roles were the one that gained him trophies on his mantel. It was his role in the HBO biopic Rasputin: Dark Servant of Destiny, which won him both a Golden Globe and an Emmy.

Looking through Rickman’s IMDb page, there are a number of films which many would have forgotten he starred in – Sweeney Todd: The Demon Barber of Fleet Street, for example. Take a look through, there are no doubt a few that you forgot that you loved.

There is still one more film in the works, however. Rickman completed his work on the new Alice Through the Looking Glass, which will be released later in 2016, so while there won’t be any more Alan Rickman films in the future,we can still hold onto him for a little longer. One thing is for sure though, his films will continue to entertain for many more generations to come.