Russell Crowe and Ryan Gosling may not be a combination anyone had considered in the past, but Shane Black saw the goodness that laid between this duo and brought the pair to the big screen in the new release The Nice Guys.

Shane Black made his directorial début with a black comedy starring the unlikely duo of Robert Downey Jr and Val Kilmer which gained him positive reviews the world over. Yet again, he reeled out the same ingredients with The Nice Guys and absolutely smashed it.

The Nice Guys is a genuine laugh-out-loud thrill ride with an interesting story, witty script and a stellar cast. Crowe and Gosling could be considered to be a dubious pairing, but the on screen banter appears completely effortless. Ever through their press tour, you can tell their friendship is real and not just something fabricated for the cameras. 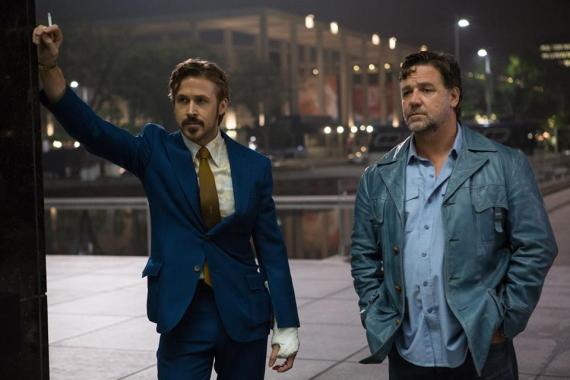 Russell Crowe has been known to turn his hand to a variety of roles, including the odd musical, but comedy hasn’t really featured highly on his resume. However, this film provides him with a dry sense of humour which suits him perfectly. Plus his experience in action-thrillers came in handy here, with The Nice Guys proving Crowe’s ability to play a complete no-nonsense badass.

While Crowe is brilliant, the stand out performance has to Ryan Gosling. Cast your minds back to 2004 when Gosling was the poster boy of choice for many teenage girls for starring in The Notebook, the film from which he’s probably best known. This, however, is the complete opposite of what Gosling should be doing. Whilst he is great in serious roles such as Drive, The Nice Guys draws out his brilliant comedic timing as a hilarious bat-like shriek. It makes it clear that Gosling is in fact a very good comedic actor, with more versitility than some people may realise. 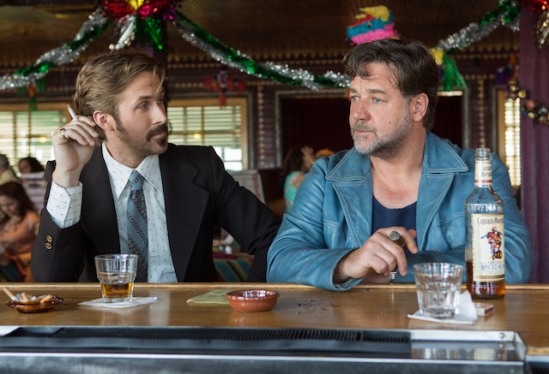 Huge props should also go to Angourie Rice who plays Gosling’s daughter Holly March. As her first mainstream big screen début, she does well to keep pace with the high ranks of Crowe and Gosling.

This is a genuinely funny film which will probably leave you in fits of giggles – I know it did to me! As long as you don’t mind the odd bit of blood, you should definitely go and see it.

If you’re still not convinced to see it, watch this scene. If you even laugh a little bit, give it a go, it’s well worth two hours of your time.